The U.S. Embassy in Afghanistan has issued a security alert advising stranded Americans to either avoid the airport in Kabul or “leave immediately” if they are waiting at the gates.

“Because of security threats outside the gates of Kabul airport, we are advising U.S. citizens to avoid traveling to the airport and to avoid airport gates at this time unless you receive individual instructions from a U.S. government representative to do so,” the embassy announced.

“U.S. citizens who are at the Abbey Gate, East Gate, or North Gate now should leave immediately,” it added.

Speaking with CNN on Sunday, Jake Sullivan, national security adviser to President Joe Biden, warned the threat of the Islamic State (ISIS) in Afghanistan should be taken seriously.

“It is something that we are placing paramount priority on stopping or disrupting, and we will do everything that we can for as long as we are on the ground to keep that from happening. But we are taking it absolutely deadly seriously,” he said.

Sullivan added that the threat from ISIS is “real, it is acute, it is persistent, and it is something that we are focused on with every tool in our arsenal.” 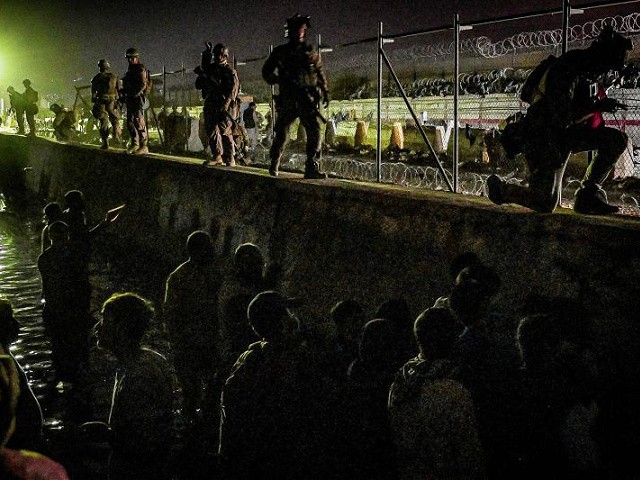 In this picture taken in the late hours on August 22, 2021 British and Canadian soldiers stand guard near a canal as Afghans wait outside the foreign military-controlled part of the airport in Kabul, hoping to flee the country following the Taliban’s military takeover of Afghanistan. (Photo by WAKIL KOHSAR / AFP) (Photo by WAKIL KOHSAR/AFP via Getty Images)

“Our commanders on the ground have a wide variety of capabilities that they are using to defend the airfield against a potential terrorist attack. We are working hard with our intelligence community to try to isolate and determine where an attack might come from,” he added.

As the threat of a potential terror attack on Kabul airport looms, the U.S. military has been forced to provide new ways to transport evacuees to the airport. According to The Guardian, more than 10,000 people remain at Kabul airport waiting to be evacuated.

On Monday, House Intelligence Committee Chair Rep. Adam Schiff (D-CA) said it is “very unlikely” evacuations in Afghanistan will be over by August 31 due to the overwhelming number of Americans, Afghan allies, and potential refugees currently stranded in the region amid an increasingly hostile security threat. Less than 24 hours later, President Biden committed to being out by the August 31 deadline after the Taliban would not agree to extend the date any further. 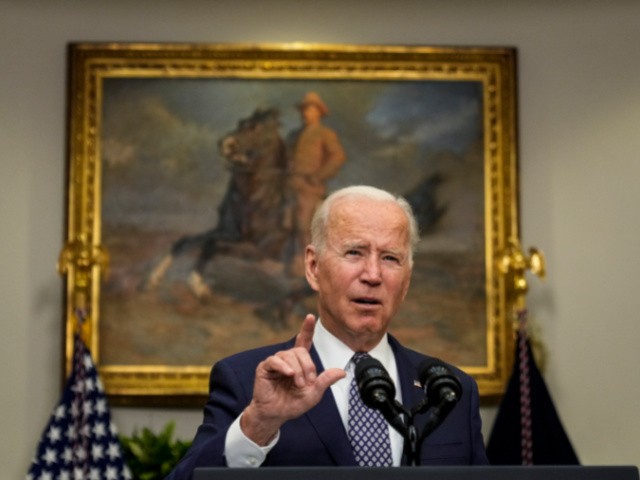 WASHINGTON, DC – AUGUST 24: U.S. President Joe Biden speaks about the situation in Afghanistan in the Roosevelt Room of the White House on August 24, 2021 in Washington, DC. Biden discussed the ongoing evacuations in Afghanistan, saying the U.S. has evacuated over 70,000 people from the country. (Photo by Drew Angerer/Getty Images)

After a surprise visit to Kabul airport, Reps. Seth Moulton (D-MA) and Peter Meijer (R-MI) also said it is simply not possible to evacuate everyone by August 31, or even by September 11.

“After talking with commanders on the ground and seeing the situation here, it is obvious that because we started the evacuation so late, that no matter what we do, we won’t get everyone out on time, even by September 11,” the congressmen said in a joint statement.