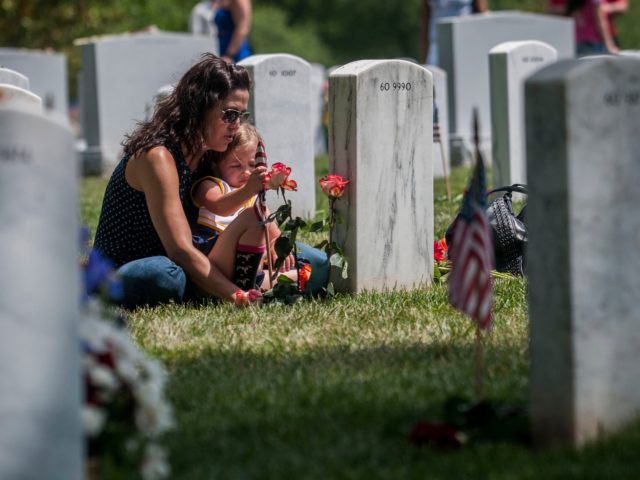 While reflecting on the purpose of Memorial Day, Rep. Brian Mast (R-FL) told Breitbart News Americans who lost their lives in armed conflicts are “sewn into the fabric of America.”

Mast, a U.S. Army who served in Afghanistan, joined Thursday’s edition of SiriusXM’s Breitbart News Daily with host Alex Marlow ahead of the Memorial Day weekend.

“There’s a really important reason that we go out there and that we take this time out,” Mast said. “We should be doing it every single, day but I always ask people, ‘Ask yourself, how do you make somebody live on that did something worthy of remembering? How do they live on?’ And the way that they do that is to remember what they did.”

He added, “You don’t just remember what they did. You remember why they did it [and] what to them was was worth fighting for, and take Memorial Day as a day to stop and think about that for a few minutes.”

“But what you do in combat, you really do for your brothers and your sisters to your left and right,” he continued. “You’re willing to give your entire life for them, and that’s the love, that’s the brotherhood, the kinship that we have, and I’m honored to be able to say that I got to know such people.”

Breitbart News reported the Biden administration rejected a permit for the annual Rolling to Remember motorcycle ride held in Washington, D.C. on Memorial Day to honor POW and MIA veterans for use of the Pentagon’s parking area.

The Pentagon’s denial of the Rolling to Remember staging request was ostensibly based on concerns related to the coronavirus.

[On] Memorial Day, you have an event that’s been going on for years — the Rolling Thunder, the Ride to Remember — patriots getting together to say, “This is how we want to remember those that gave their life.”

Now, as Americans, we should be doing everything humanly possible to enable that memorializing of those that served our country, whether it’s for Rolling Thunder or anything else if that’s what’s being done, but you had the Pentagon for a month saying, “No, listen, we’re not going to let these people use our parking lot.”

The seat of power for the military, basically, the Pentagon. not going to let them use [their] parking lot to memorialize our veterans, and then all of a sudden, one day, President Biden just flips the script and he says, “Oh, apparently you don’t need to wear masks outside or inside anymore,” but they’re  still not willing to let people go and use the Pentagon parking lot on Memorial Day to set up a motorcycle ride to remember those that gave their life.

That’s how much they don’t care about the science. You can’t stand in a 70-acre parking lot outdoors, separated, even though you can get around in life and not wear a mask and be vaccinated and things like that. It makes no sense.

Mast reflected on the character, commitment, and sacrifice of the death of one of his brothers in arms in combat.

“He was killed, I want to say it was on his 12th appointment,” he stated. “This was back in 2010 that he was on his 12th deployment overseas. That was his commitment, his time away from his family, away from his children that he left behind, birthdays, bath time, baseball games, dinners, everything that people take for granted.”