McALLEN, Texas — Rep. Jim Jordan (R-OH) during a two-day visit to the U.S.-Mexico border described the main federal border facility in Donna, which is far exceeding its capacity, as “chaos,” providing his remarks to Breitbart News on Wednesday after a roundtable meeting with congressional colleagues and Texas officials.

Jordan this week led a delegation of several Republican members of the House Judiciary Committee, the committee that has primary jurisdiction over immigration policy, to McAllen to tour the southern border and visit multiple federal border facilities. 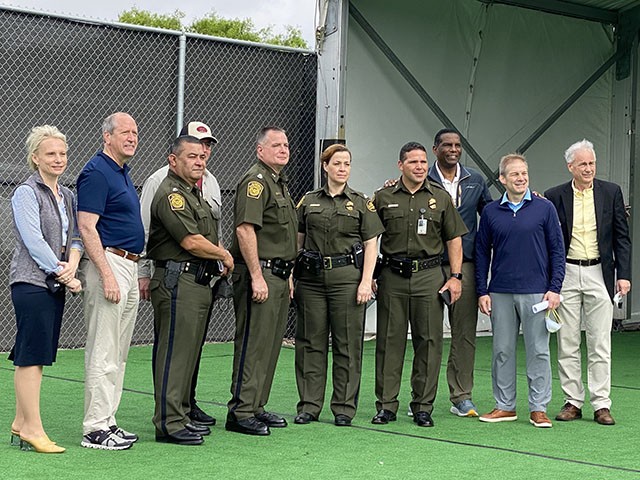 Jordan, who is ranking member on the committee, observed cramped conditions in one “pod” in the Donna facility, which primarily holds unaccompanied alien children (UACs), noting the pod was holding 15 times more UACs than was permitted under current coronavirus guidelines.

Media were not allowed to accompany the delegation on its facility tour, and aside from a “single event” with select outlets last week, are currently not allowed access to the facility at all, a Customs and Border Protection (CBP) official confirmed to congressional staff.

Jordan said, “We saw one pod that was supposed to have 33 kids in this confined space area, and they had 527. So, that to me is overwhelming. That’s chaos. That is what our good Border Patrol agents are having to deal with.”

The over-capacity pod is one product of a surge in illegal migration that U.S. Border Patrol’s union president, Brandon Judd, said during the roundtable was “unlike anything we’ve ever seen before.” In March, CBP reported 170,000 apprehensions of migrants crossing the border illegally, up 72 percent from February. According to Judd, that is the most monthly apprehensions Border Patrol has seen in the last 15 years. More than 18,000 of the 170,000 were UACs.

Jordan, like many of his Republican colleagues, says the first response to controlling the growing issue is reinstating the Trump-era Remain in Mexico policy in which border officials were able to send migrants seeking asylum back to Mexico to file their paperwork and await the processing of their claims.

Jordan assessed that President Joe Biden’s suspension of the policy was a key reason the numbers began to swell and that the Biden administration’s priorities for addressing the influx are unclear. “What I do know is the Remain in Mexico policy was working,” Jordan said. “Every border agent we talked to told us that is the reason they are seeing this surge, and according to the head of the Border Patrol council, Mr. Judd, he said this surge is unprecedented. He’s never seen anything like it.”

Biden’s Department of Homeland Security halted Remain in Mexico on his first day in office, citing a “commitment to reform immigration policies that do not align with our nation’s values.” The Associated Press reported the policy “exposed people to violence in Mexican border cities” and created more hurdles for completing the asylum-seeking process but that the Trump administration instituted the policy as a “critical” means of controlling peaking numbers of asylum-seekers in 2019.

When asked what stood out to Jordan the most during his trip, the Ohio Republican said it was the “overwhelming numbers” and added that although his “heart goes out to the kids, to the families,” the volume presents a “huge” concern for American education and hospital systems.

“They said there are 16,000 kids, as we speak, who have moved from Custom and Borders to HHS, and they’re housing these kids, and these kids are going to be sent somewhere in the country to some relative — maybe a parent, maybe someone else — but they’re going to be moved in the country, and that turnover is every 24 days,” Jordan explained. “They told us that that 16,000 number turning over every 24 days, that number’s going to go to 60,000 turning over every 24 days. So you do the math. That’s hundreds of thousands of children just coming into the country over the next year, and you couple that with all the other immigrants we’re seeing coming into the country. It is two to three million people in one year’s time that they’re all coming in, and what does that mean for communities? What does that mean for our public education system? What does that mean for our hospital systems? That’s huge. So, that is a concern, and it can be prevented and it can be done in a legal fashion if we put back in place the policies that were working.”

Jordan said he believes the Biden administration’s second priority after reinstating Remain in Mexico should be to complete the border wall.